Managing Your Money in the Mayhem (With Karl Eggerss)

In times of stress and volatility, how should you manage your money?

Join me and financial expert Karl Eggerss for a great conversation on how to manage your investments during times of anxiety and market turmoil. 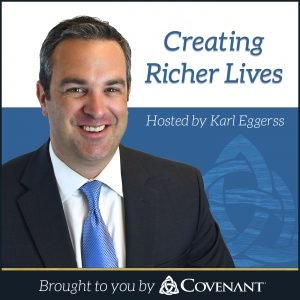 Karl’s biography: Karl J. Eggerss is a senior wealth advisor and partner of Covenant. In addition to leading the Boerne office, Karl is instrumental in the firm’s efforts to educate the public regarding the financial markets through media channels including radio, television, and podcasts. He is also a contributing member of the investment committee where his insight is a valuable addition to our strategic research, manager due diligence, and portfolio construction.

Karl’s interest in the financial services industry started at an early age when his father purchased him his first stock position in the mid 1970’s and he made his first trade at age 14. After earning his BBA in Finance from Southwest Texas State University in 1995, with a specialization in Financial Planning, he started his career working for Fidelity Investments in Dallas, Texas as a mutual fund trader. After Fidelity, he served for 14 years at a San Antonio based money management firm where he ascended to the role of Chief Trader.

In 2010, Karl established a successful and rapidly growing registered investment advisory firm, Eggerss Capital Management. In May of 2019, he seized upon the opportunity to merge his firm with Covenant. This combination has allowed Karl to add more resources and enhance his ability to provide insightful planning and investment guidance to his clients.

Through his career, Karl has hosted a syndicated daily radio show airing in Houston, Dallas, San Antonio, Colorado Springs, & Denver and has been invited to speak on the market at various financial news networks including CNBC, CNBC Asia, Bloomberg, Fox Business, & Reuters. Karl enjoys offering public discourse on the state of the economy and the financial markets whenever possible.

After meeting his wife, Amy, in college, they were married in 1997. With their two children, Anson and Avery, Karl and Amy currently reside in Fair Oaks Ranch, Texas. In his limited spare time, Karl enjoys golf and spending time with his family.