No Place To Hide

A Brain Surgeon's Long Journey Home from the Iraq War 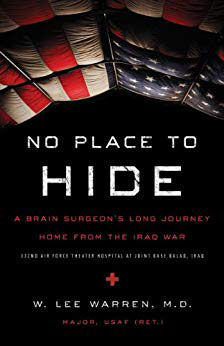 A War Zone of the Soul

Dr. W. Lee Warren’s life as a neurosurgeon in a trauma center began to unravel long before he shipped off to serve the Air Force in Iraq in 2004. When he traded a comfortable if demanding practice in San Antonio, Texas, for a ride on a C-130 into the combat zone, he was already reeling from months of personal struggle.

At the 332nd Air Force Theater Hospital at Joint Base Balad, Iraq, Warren realized his experience with trauma was just beginning. In his 120 days in a tent hospital, he was trained in a different specialty—surviving over a hundred mortar attacks and trying desperately to repair the damages of a war that raged around every detail of every day. No place was safe, and the constant barrage wore down every possible defense, physical or psychological.

One day, clad only in a T-shirt, gym shorts, and running shoes, Warren was caught in the open while round after round of mortars shook the earth and shattered the air with their explosions, stripping him of everything he had been trying so desperately to hold on to.

Warren’s story is an example of how a person can go from a place of total loss to one of strength, courage, and victory. Whether you are in the midst of your own crisis of faith, failed relationship, financial struggle, or illness, you will be inspired to remember that how you respond determines whether you survive—spiritually, emotionally, and sometimes physically.

It is the beginning of a long journey home.

"Powerful, emotional, tender, real, infuriating, mind blowing. It is one of the best books I have ever read. It will transport you to the operating room in a tent hospital in Iraq and give you a deeper understanding of the war and the sacrifice of our medical heroes who fought to save others. You won’t be able to put it down."

"My friend Lee Warren has faced challenges that most of us only read about. While the journey hasn’t been easy, he has emerged with a resolute faith and a few lessons for us all. We can greatly benefit from his wisdom."

"Through Warren’s eyes we observe not only the delicate mechanics of brain surgery but also its lifelong effects on real people and their families, both when the surgery succeeds and when it fails… Thank you, Lee Warren, for letting us see the world through your own unique vantage point."

"No Place to Hide is three books hidden in one. It’s a book about a military surgeon and how he dealt with his time in Iraq. It’s a book about a man of faith struggling with the questions anyone would. Thirdly, it’s a book that challenges you to walk through W. Lee Warren’s life as he’s laid it out, but to imagine your choices, your decisions, and then apply all this to your own life. This isn’t an easy read. It’s a door thrown wide open. Be brave and you’ll see the rewards."

"As a combat brain surgeon, Lee Warren graphically and compassionately exposes the unspeakable horrors of our hellish war in Iraq–hidden from all not there. For him physically and emotionally there was indeed no place to hide, but his descriptive eloquence elicits deep appreciation and respect for him and the thousands of others who have been scarred on our behalf."

"This book captures simply, eloquently, and passionately what it means to be a physician in time of war. This very personal story captures the essence of what it takes to be a military physician and the challenge for our nation to reintegrate all who deploy to war."

"In a well-written narrative, mixed with actual email reports he sent home, Warren transports the reader to the battle zone and shares his thoughts, raw emotions, opinions on America’s involvement in Iraq, and lessons learned during his tour of duty. Most poignant are the heart-wrenching stories of injured children and the agonizing decisions he must make about which victims to save and which ones he can’t."

Enter your email below and join our growing community.